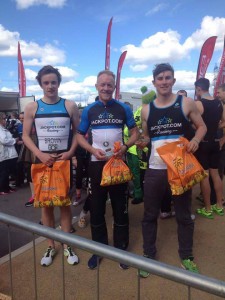 On the day that Yorkshireman, Alistair Brownlee showed he can do press-ups in the middle of a World Series event and still win, other proud Yorkshiremen were flying the Jackpot flag in numerous locations.

Close to home, at York Triathlon, Mika Brown took on his first Elite entry, just one week after coming second overall at Duston. And what a debut! Mika cruised the 400m swim in 5:02, then knuckled down in blustery conditions and an horrendous six-lap bike course, with dead turns and broken cobbles, to enter T2 shoulder-to-shoulder with Adam Robinson and 30 seconds ahead of a chasing pack of three who managed to draft the bike. Onto his favourite discipline, Mika put the hammer down and recorded an overall victory in a top time of 52:47.

As a warm-up for the elite race, Mika joined fellow Jackpoters Tom Linton-Neal and Chris Brown in the York Tri Relay. Unlike many relays, this one was competitive from the start with just two minutes separating the top five teams. However, our brave trio ran out winners by just 35 seconds, 28s of which were gained in transition. Worth all that practice then!

If bravery is what you are looking for, then search no further than Jenni Muston. Having trekked over to Spain for the European Duathlon Champs, swapping her race-kit at the airport for a bag full of nappies, Jenni and the other competitors were faced with monsoon-like wind and rain for the event. After a solid first run, Jen headed out onto a bike course that saw barriers and hoardings flying across the road. But after fighting conditions for all but 9k, sadly Jen had to pull out (and pealed off the bike) whilst in second position. “Carnage” is probably a fair description of the race with more than 100 dropping out of Jen’s race and numerous accidents.

It was Tom who recorded the fastest race of the day with a top time of 1:54 to finish a fantastic 6th overall just ahead of Matt Hallam in 7th (1:56) and Matt Pears in 17th (1:59). Dave’s hamstring gave out with about 500m to go in what is proving to be a bit of a chronic injury. Nonetheless he came home in 17th place, but importantly grabbed a spot at the Worlds in Australia later in the year.

We’ll be organising a team press-up session in a cryo unit later in the year, to try and improve the team’s results further.