The National Triathlon Relays on the weekend of 22nd and 23rd August, 2015, put Jackpot Racing firmly on the map with podiums on both the Saturday and the Sunday, and securing the kudos of winning the main event overall.

Saturday saw Jackpot take home their first win in the Men’s 40+ Vet category to become National Champion despite being a man down and two of the remaining three being 50+ anyway! This race was over the traditional relays format of a 500m swim, 15k bike and 5k run with each triathlete in the team completing the disciplines before moving on to the next.

The first challenge for the team, being only three, was to figure out who doubled up in which discipline and in what order so as to minimise fatigue and get the best result. Given that the chips had different colours from the wrist bands and were numbered 0-3 instead of 1-4, coupled with age-related dementia and Alzheimer’s, it proved more of a challenge than it should have.

To cut a long story short, Colin Hill shouldered the biggest burden, doubling up in the swim and the cycle, before Tim Ashelford doubled up on the run in scorching conditions. Chris Brown, meanwhile, as the weakest link, tried hiding in the bushes, muttering something about Gingers and the sun. Perhaps his most productive efforts were in doubling up on the admin; getting the team into the right race, on the right day and as a ‘club’.

Sunday’s racing was a completely new format for the relays which resulted in not only more podiums for Jackpot but a renaissance for the relays as a weekend.  The first race on Sunday morning was a qualifier for a Time Trial event later in the day.  Teams of four athletes completed a short distance triathlon – 250m swim – 5k bike – 1500m run – before tagging the next athlete in the team, making the fourth discipline of transition a larger focus than normal.

Jackpot Racing had six teams in the morning heats qualifier.  The top ten teams of each category – mens, ladies, mixed and open – went through to the afternoon Time Trial.  Jackpot’s men’s elite team gained much attention from the spectators and fellow Jackpot athletes with a close fought victory over the Racetime Events team in second. The elite team was made up of David and Tom Bishop, Adam Bowden and Max Hazell. Jackpot 2, made up of ex-students Mika Brown, Andrew Whiteley, Will Cowan and Kieran Hill also went through to the TT final after finishing in 8th overall.

Jackpot 3 consisting of Rich Knell-Moore, Tom van Rossum, Alistair Cooke and Mathew Pears produced strong performances across the board to rank 16th overall. Whilst Jackpot 4 with John Swallow, Matt Wilson, Ady Stott and Richard Howarth all had strong races and some top drawer splits (3:08 swim anybody? – faster than the elites) to place 41st.

The Open Jackpot team made up of Chris Brown, Kathryn Dickinson, Claire Pickersgill and Jenni Muston also went through to the final along with the men’s Vet team consisting of Ben Garrard, Gary Simpson, Francis Riley & David Morley despite placing 44th and 50th respectively, such are the vagaries of the team categorisations at The relays

If spectators thought the morning’s race was exciting, they were in for an even more thrilling event in the time trial in the afternoon.

Setting off at one minute intervals, the teams who had qualified from the morning raced as a team at the same time, ie all four athletes setting off at the same time over double the distance of the morning. The time of the last athlete finishing in the team went down as the team time. So, knowing who to draft off in the swim and bike and who to pull around or be pulled around with on the run was absolutely key. 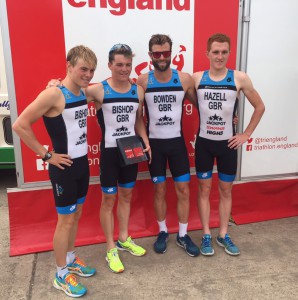 The racing was phenomenal. The atmosphere was electric. Some athletes heart rates went to new territories, not just through racing but also through spectating! The Jackpot men’s elite team were pushed hard by the Racetime Events team and finished with an almighty win, 41 seconds ahead of second place. It made for awesome watching. Many congratulations to David, Tom, Adam and Max. Simply seamless racing.

Jackpot 2 also produced a blinder in the final, moving up three places to finish a fantastic 5th overall. The men’s Vet team took silver in the open category with the Open team just missing out on a podium in fourth. But, by golly, that just shows how strong our ladies are where most other open teams were made up of three men and one lady, our 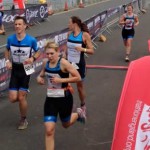 A massive thank you to all of our athletes for racing. There were non-stop smiles throughout the weekend. Still being a relatively young team in existence, Jackpot Racing really came together as a team over the weekend and one we are all proud to be part of.