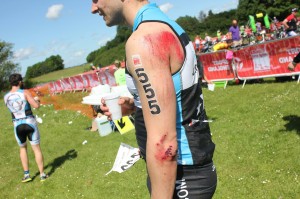 Matt Wilson decided to inspect the tarmac outside a pub on the Grafman Middle Distance. He completed the bike in 2:30 but knee pain pushed him out of the run after 5k :-(. All news was not bad from Grafman (which was the National middle distance champs this year) however as Tom van Rossum came 3rd in the M30-35 age group and a very creditable 10th overall with 0:32, 2:17 and 1:25. Good effort.
Further afield, swim specialist Kieran Bones-Hill rather unusually found himself in the second bike group at the Blenheim elite triathlon, only to be taken out on the second lap by someone pulling into his front wheel and bringing three other guys down at the same time. Again, though another JR sprang to the rescue; David Bishop followed up his win at Lough Cutra with a 3rd overall. Will Cowan was the third of our team at the race but decided not to do the run due to injury.
Richard Knell-Moore stayed upright to post a 2:10:55 in the Deva with a 1:02 on the bike.
Over at Bala Middle Distance Eddie Howarth ate up more road than toilet paper and baby wipes in posting 4:22:16 to claim 6th place overall with 0:29, 2:20 and 1:30. That’s moving.