Jackpot’s Chris Brown ventures into the world of Obstacle Course Racing. Here is what he had to say… 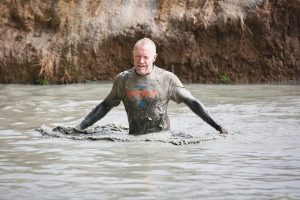 “On Saturday 16th September, I succumbed to doing one of these obstacle race things.  You know, the type that always have “mud” in the title and/or various combinations of hard sounding words like Warrior, or Tough Warrior or Fucking Titanium Hard-core Warrior.  Anyway, it was for a friend’s Charity so I’d turn up, walk round with them and try not to get cold or bored.  This one was the Devil Mud Run.

The group warm-up led by the usual army-wannabee complete with battle fatigues (just to make sure you know he’s hard, but the closest he’s ever been to an Afghan is the local dog show) and forced banter, aka team-bonding, at the start didn’t raise expectations too much, neither did the overcast skies and intermittent drizzle.

Gun went and, of course, the first bit was running uphill as the sound system blasted out Chariots of Fire tunes (that was a 400m race, guys). The pumped-up teams in their matching tops sprinted away at 15minute/5k pace.  Not far into it, we were met by the first obstacle, three wooden barriers about 7 foot high.  I was also met by scores of panting, over-weight mud runners who had shot their bolt not two minutes into the event (I say event because it isn’t officially timed).  Then on top of the barrier, I look down at the fat shorties who are never going to get over this first wall.  “Going to be a long day” I thought to myself.

But what transpired was so far from those negative thoughts.  The shorties were lifted over the wall by other runners, not always in the same ‘team’ and, whilst they still fell behind, the mass pushed onwards.  My thoughts of it being a walk in the park were blown away.  Without a doubt the course was tough, all off-road, through some lovely countryside but taking in every metre of incline they could find.  The basic trail was muddy enough, but the organisers had added their own sloppy, grey clay, clinging mud to narrow sections as well as wooden and hay-bail obstacles to navigate. They all became quite good fun, laughing at how stuck some people could get and figuring out your own best way through the mess of terrain and mess of people.

The whole thing took a minute short of two hours and for a good 80% of that my HR was in race zone, so it was a bloody good work out.  Add in a few laughs and pleasure at helping somebody through a (sometimes literal) sticky patch instead of racing past them, the fact I was actually overtaking people whilst running, subtract the cuts and bruises, and you end up with a really good day out.”