Mika Brown kicked off an early weekend in Australia…think it was still Friday here…at the Sole Motive Spring Into Shape 5k in Melbourne.  Mika smashed out a whopping 16 minutes 30 seconds and was second overall. Sounds a lovely route along the Yarra River and around the outskirts of the Botanical Gardens.

Still in the running discipline, Jenni Muston headed to Worksop for the half marathon to try and duck under 90 minutes for a championship entry at the London Marathon next year…mission accomplished, 7th lady overall and 2nd in age group (41-44). Let the hard work begin!

And then Kieran Savage had an absolute blinder of a race at the National Hill Climb championships in our own county at Jackson Bridge! To put things into perspective Kieran is a junior…his time of 4 minutes 28 seconds up the climb was just 9 seconds behind the fastest male senior.  Kieran bought home the glitter that is gold. 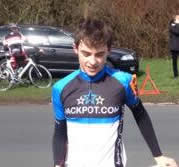 A nice set of smart punchy results this weekend 🙂